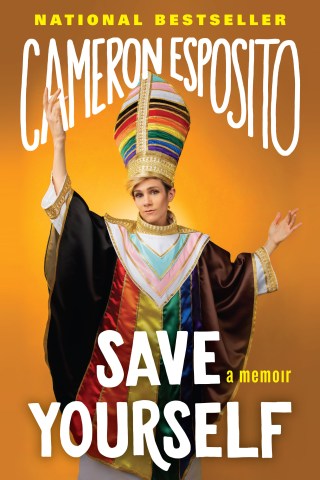 From standup comic Cameron Esposito, a memoir that tackles sexuality, gender and equality--and how her Catholic upbringing prepared her for a career as an outspoken lesbian comedian in ways the Pope never could have imagined.

GET YOUR COPY NOW

From standup comic Cameron Esposito, a memoir that tackles sexuality, gender and equality--and how her Catholic upbringing prepared her for a career as an outspoken lesbian comedian in ways the Pope never could have imagined.

Cameron Esposito wanted to be a priest and ended up a standup comic. She would like to tell the whole, freaking queer as hell story. Her story. Not the sidebar to a straight person's rebirth-she doesn't give a makeover or plan a wedding or get a couple back together. This isn't a queer tragedy. She doesn't die at the end of this book, having finally decided to kiss the girl. It's the sexy, honest, bumpy and triumphant dyke's tale her younger, theology major self needed to read. Because there was a long time when she thought she wouldn't make it. Not as a comic, but as a human.

SAVE YOURSELF is full of funny and insightful recollections about everything from coming out (at a Catholic college where being gay can get you expelled) to how joining the circus can help you become a better comic (so much nudity) to accepting yourself for who you are--even if you're an awkward tween with an eyepatch (which Cameron was). Packed with heart, humor, and cringe-worthy stories anyone who has gone through puberty can relate to, Cameron's memoir is for that timid, fenced-in kid in all of us--and the fearless standup yearning to break free. 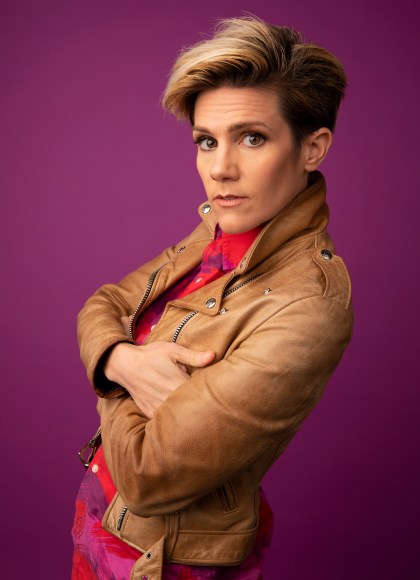 Cameron Esposito is a Los Angeles-based comic, actor, and writer. Cameron's career has spanned everything from big-budget films to Sundance indies to animation. She costarred in and cocreated the much-lauded Take My Wife, now on Starz, has written for the New York Times, and has appeared as herself on TV, podcasts, and web series alike. Cameron hosts a popular interview podcast, Queery with Cameron Esposito, and her recent hit comedy special, Rape Jokes, raised almost $100,000 for rape crisis intervention.

Growing up in the 1980s and ’90s in suburban Chicago, I didn’t know gay people were real. I thought gay people and leprechauns were mythical creatures for parades with hats and buckles, and some of that’s true.

I do own several buckles.

Before The L Word was pitched, when Lena Waithe and Kate McKinnon were kids, lesbians existed but I couldn’t see ’em. Or hear ’em. Or look ’em up because THERE WAS NO INTERNET. Ellen had a scripted show on the air and I wasn’t allowed to watch it.

Mx. DeGeneres hadn’t yet voiced a fish, created a talk show suitable for any doctor’s office, or even publicly come out, but my very Catholic parents sensed the cut of her Birkenstock and your grandpa Cameron wasn’t allowed to watch her show.

Then I fell in love, found comedy, and met some people who weren’t Catholic, or weren’t as Catholic as me. Slowly, over years, I worked to accept myself as perfectly fucking normal and okay.

Now, because of my job, I often present only that part of me to the world. But there are other parts.

There’s this scene in the 1972 film version of Cabaret where Liza Minnelli’s character, Sally Bowles, is backstage, about to walk out and perform at the Kit Kat Klub. It’s 1931. It’s Berlin. And things are about to be awful. Also, Sally’s just had an abortion, which is messing with her bod, and she’s emotionally raw because she’s kinda going through two breakups at once, and THEN THERE’S THE FUCKING NAZIS TO THINK ABOUT. Anyway, Cabaret is a very good movie.

The scene I’m talking about is maybe two seconds long. I first watched it with my Big Deal Ex*—you know, the one who was my first real adult I’m‑in‑my‑midtwenties partner who I thought I’d maybe marry even though same-sex marriage was then illegal? My Big Deal Ex was a modern dancer, obviously, like my older sister, and showed me Cabaret because the dang movie is directed by Bob Fosse and when you spend a lot of time around dancers you learn that apparently it is possible to “tuck your tailbone” and that I should, in fact, “tuck my tailbone,” and you also learn about Fosse and Tharp and Ailey and Baryshnikov (before Carrie Bradshaw).

It starts out dark. The curtains are closed. Sally is alone, head down, looking nowhere at nothing, and it’s just her vulnerable, real, suffering self. Then the curtains open, light floods over her, and in the time it takes her to raise her head, her face—her whole being—is transformed: With a wide red grin and confident shoulders she walks out onstage. And when she does, she stops time. She owns herself and you and you’ve agreed to be owned and you’re happy about it.

And that’s what it feels like every time I do stand‑up. Each time I step onstage, I leave my small, worried self behind and become a version of me that is power and projection. Onstage I’m your daddy. Backstage I’m upset and critical. So maybe your father?

Here’s just one example: It’s September 3, 2013. I’m performing on The Late Late Show with Craig Ferguson. It’s my first time on network television. The curtain opens and I walk out onstage and, honestly, crush, Sally-​style. Craig and Jay Leno, the other guest that night, interrupt my set and call me over to the couch (the biggest compliment a stand‑up comic can get) and I sit between them, my feet not touching the ground even though I’m sitting in a fairly low chair because I’m the size of a Tamagotchi. My then-​partner is in the greenroom, watching the taping beside the show’s producers, and the room erupts with cheers when I’m invited to the couch. My parents watch the broadcast and I give ’em a shout-​out. It’s one year to the day since I moved to Los Angeles, and my hope is that this TV appearance will put them at ease. That they’ll scream, “She made it!” at one another before collapsing into each other’s arms, exhausted.

Because there was a long time when they—and I— thought I wouldn’t make it. Not as a comic, but as a human. As a queer gay lesbian human being, which I am.

People frequently come up to me after shows and tell me I am the first out gay person they’ve met. This still happens. Today, the day you are reading this, this happened. I’m sure of it. Some are straight and I’ve “changed their mind about queer folks.” Some are queer folks raised with a few more queer characters on TV but still isolated in the real world, who see, in me, an example of a possible future they might have, with a career and an extensive collection of button-​downs. I’m proud of that, but it feels a little like only watching that one scene in Cabaret, and I’d like to tell the whole fucking queer‑as‑hell story.

This is a book about the small, worried guy left backstage. It isn’t a sidebar to a straight person’s rebirth—I don’t give a makeover or plan a wedding or get a couple back together. It’s not a tragedy. I don’t die at the end of this book, having finally decided to kiss the girl. It’s honest and bumpy and scared and sexy and real.

It’s the dyke’s tale my younger self needed to read.

And I hope you enjoy it.

*Cammy’s Note: It would seem that as this book publishes, I will have an even Bigger Deal Ex. It’s an excruciatingly painful loss that I chose not to write about in this book except here where I’ll say: GODDAMNIT.